Hard to believe, but this was the first ever Carolinian Language Symposium held. The reason for the Symposium was to address the rapid erosion of the Carolinian (Refaluwasch) language proficiency in the Refaluwasch community. 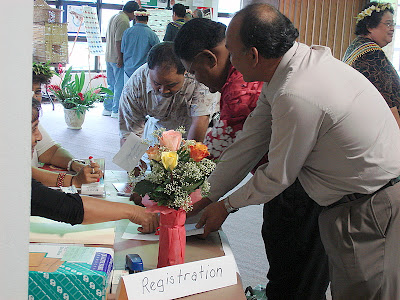 Registering for the Symposium, from the left are Joe Itibus, Gus Kaipat and Rep. Frank Dela Cruz, who was on hand to help present a House Resolution to the Carolinian Affairs Office. 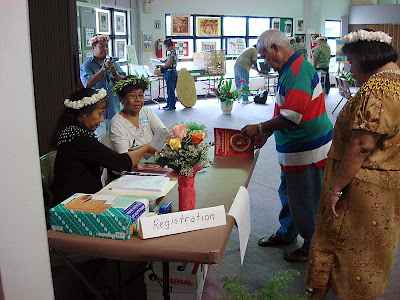 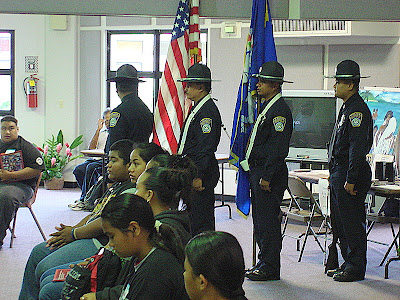 DPS Color Guards at the official start of the ceremonies. 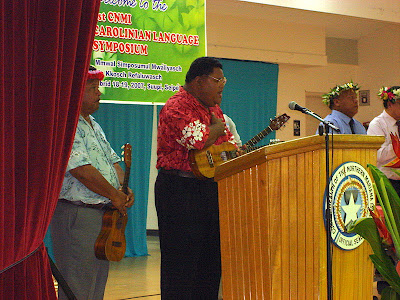 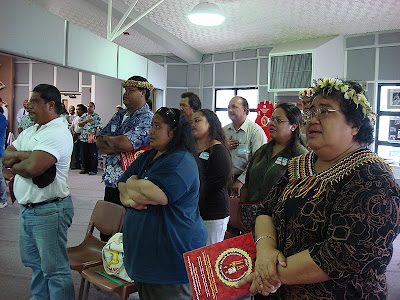 Forefront, far right: Angie Ignoef-Mangarero, Executive Assistant of the Carolinian Affairs Office. She is the first female to ever hold this position since the Commonwealth was established. In this red booklet that she's holding, I was listed among several predominently male Refaluwasch as a "first Refaluwasch producer." How ironic that she was left off the list of "Refaluwasch pioneers." I don't recall if "Felicidad (Daling) Ogumoro was mentioned also, but she was the "first female Congresswoman" that the CNMI ever had! Hmmm.... 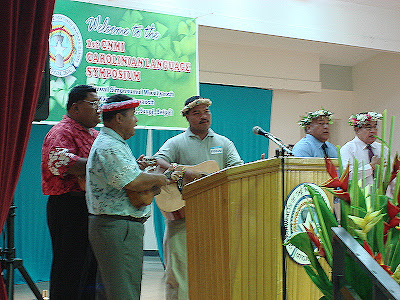 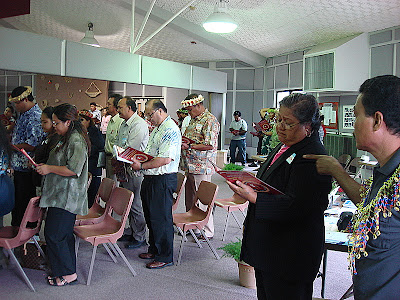 Here, everyone takes a crash course in the song that Edson Limes composed for this Symposium. The term for it is probably called "crash singing." Not exactly what the name implies. Edson did a great job and with the lyrics provided, the audience quickly learned the song well enough to sing along. In the middle row from closest to farthest are Public School System Commissioner David Borja, Rep. Frank Dela Cruz, and Vice Speaker Justo Quitugua. 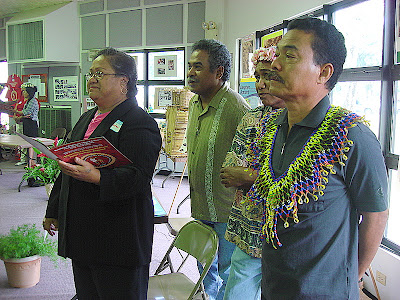 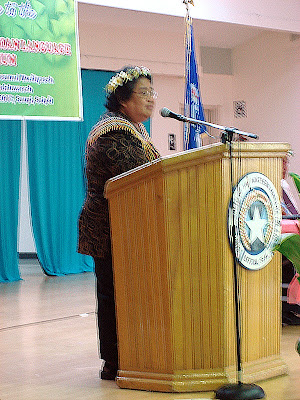 Angelica (Angie) Iginoef-Mangarero is the first woman to be appointed to the position of Executive Assistant of the Carolinian Affairs Office. Governor Benigno R. Fitial appointed her to this position. Not only was this appointment historic, but Governor Fitial also made history when he appointed Rebecca Warfield to the position of Commissioner of Department of Public Safety (DPS). Good appointments, Governor, and CONGRATULATIONS to Angie and Rebecca. You are important role models to the women and young ladies in our Commonwealth. 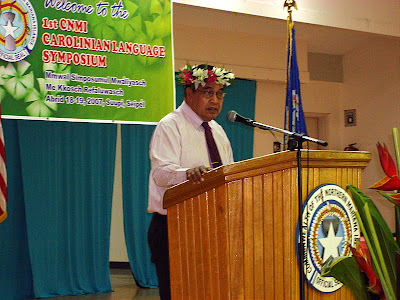 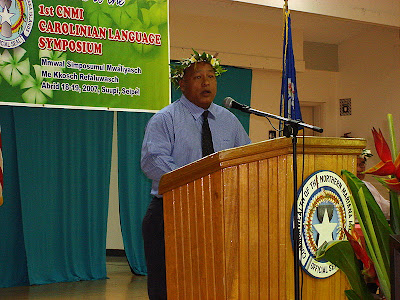 Lt. Governor Timothy Villagomez addressing the attendees, sharing that he has "a little bit" of Refaluwasch blood in him, which comes from his late father's side. 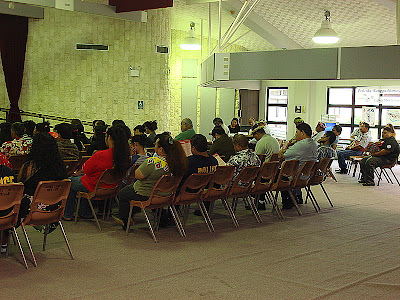 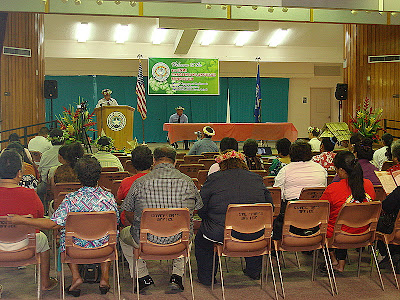 Back row backs from left: Vicky Selepeo Magofna, Nana Rosie Roppul-Warakai, Tom Tebuteb, me (Rep. Cinta Kaipat), and I don't know the rest of the people to my right. I wish I could report on the Symposium, but right after Vice Speaker Justo Quitugua, Rep. Frank Dela Cruz, and I presented the House Resolution, we left to attend the House Session scheduled for that day and the following day. I was quite disappointed that the last-minute scheduling of the House Sessions prevented me from attending the rest of the Symposium, especially since I was scheduled to be a presenter and panelist months ago. I may not have been able to contribute as a presenter or panelist, but I at least hosted lunch the first day of the Symposium. 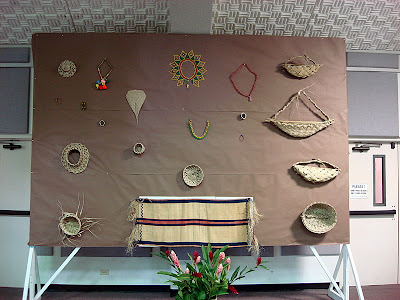 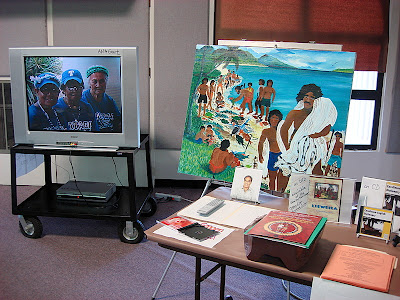 Artwork and assorted publications that were supported by the Library Friends, some with funding through an ANA Grant that led to the construction of the Children's Library called Children of Our Homeland Library. I am a Board Member of Library Friends as well as its past vice president. 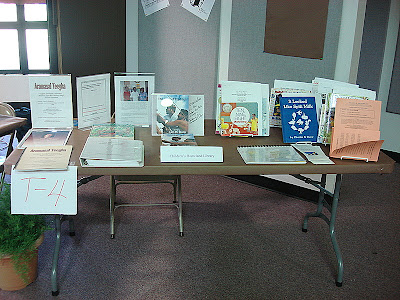 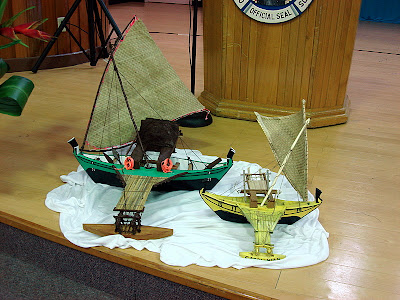 Replicas of the traditional Refaluwasch canoe. 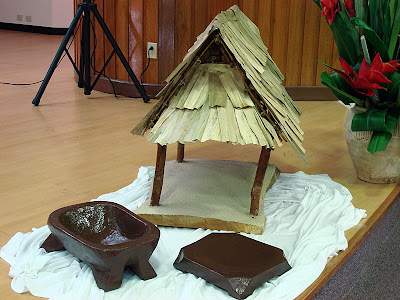 A replica of a traditional Refaluwasch Utt.
Posted by CNMI Blogger at 11:46 PM

Thanks for sharing those photos. The older I get, the more I appreciate and treasure my culture. It's so important to hold on to who we are - our character, our family, and our culture.

When I see you, I will disclose some of the future plans I have in mind about promoting culture with Beautify CNMI!

Thanks for your continuous encouragements!

hello!
I am very interested in languages and since I'm called Carolina I am drawn to this one. But there's very little I can find online that talks about the language itself. Would someone be able to tell me how to say "I love you" in Carolinian? I mainly just want to know how to pronounce it. Thank you very much