Give PEW A Chance


Give PEW a chance


By JACINTA M. KAIPAT
Special to the Saipan Tribune

I am fully aware that there are some individuals, and one individual in particular, who have been actively spreading misinformation about PEW and PEW’s intent. Rumors, innuendos, and political rhetoric should not play a part in preventing each and every one of us from exercising our responsibility to gather as much information and examining both sides of this issue before making up our minds.

My late father, Frank Borja Kaipat, was a congressman and District Administrator in charge of the Northern Islands in the ’60s up until 1972. In Carolinian culture, we believe that where a person dies is where their spirit shall forever remain. My father breathed his last breath on Pagan Island. This is another reason I care deeply and will ALWAYS care deeply about the Northern Islands. One thing that my father’s leadership taught me by example was that all of our islands are interconnected and that what happens on one island impacts the rest. I’ve always understood this.

I was first introduced to Jay Nelson of PEW by Rep. Diego Benavente. I introduced Jay to Angelo Villagomez. For those of you who don’t know me, my love and loyalty to our people and our islands is unquestionable. I was born in the Northern Islands. I will ALWAYS care deeply about these islands and future of these islands probably more than anyone who has never been there or lived there. The Northern Islands will ALWAYS be special to me.

I just served as a congresswoman in the 15th Legislature and founded the well-respected, award-winning environmental organization Beautify CNMI! My track record speaks for itself. My beliefs in the preservation of our core traditional and cultural values are well-documented in the award-winning cultural and historical documentary film Lieweila: Navigators’ Children/A Micronesian Story.

I have known and worked with my friend Herman Tudela in assisting our local fishermen. As a Senate aide to former senator Tom Villagomez, I appeared and testified before WESPAC in support of the preservation of our local Chamorro and Carolinian cultural and traditional fishing practices. I served for years as a member of the Historic Preservation Review Board. My keen interest in enhancing our people’s quality of life has a direct influence on my passion for enhancing our land and water environment and in the preservation, conservation, and propagation of our plant and animal species (in the broadest sense).

Please, I humbly and respectfully ask each and every single one of us NOT to rush to judgment, but to allow our community to have this much-needed open dialogue with PEW representatives on this very important issue. Only then would we be able to collectively and responsibly make a well-informed decision that would be in the best short and long-term future interest of our people, our islands and our natural resources. Our children deserve nothing less.

Jacinta Kaipta is a former congresswoman in the 15th Legislature and is currently the deputy secretary of the CNMI Department of Labor. She helped found the environmental group Beautify CNMI!
Posted by CNMI Blogger at 1:15 AM 2 comments:

Beautify CNMI Awards To Be Presented On March 27

THE winners of this year’s Beautify CNMI! Steward and Champion awards will be announced at the Saipan World Resort on March 27.

Beautify CNMI! volunteer Angelo Villagomez said the two recipients of the awards will be recognized for their contribution as exceptional environmental leaders during the last 12 months.

The Steward Award is given to an individual or an organization who has demonstrated real concern for the islands of the CNMI.

The Champion Award is given to a person or group who shows the true spirit of Beautify CNMI!

Among the criteria used for picking the winners are volunteerism, innovation, cooperation, creativity and the ability to spread the “beauty virus” all over the island.

As part of their anniversary celebration, Villagomez is also inviting the public to get their tickets now for the world renowned ukulele virtuoso Jake Shimabukuro’s concert which will be held on the same night.

“VIP tickets for the concert are already sold out and we are urging everyone to buy their tickets now before everything is sold out,” Villagomez said. He said the doors will open at 6:30 p.m. as the concert will start at 7 p.m.

“We are inviting one and all to come to the concert. This is a real treat for the people of CNMI,” he added.

The proceeds of the concert will benefit the Beautify CNMI! and the Hotel Association of the Northern Marianas Islands.

Villagomez said the local audience will surely be entertained by the Shimabukuro’s revolutionary musical playing which ranges from jazz, blues, funk, and classical, bluegrass, folk, flamenco and rock.

Villagomez said the tickets are $25 for adults and $15 for children less than 12 years in age. Tickets are available at the Century Hotel, the Marianas Eye Institute or you may call Beautify CNMI! volunteer line at 285-6462.
Posted by CNMI Blogger at 2:10 AM 2 comments:

[I still fail to see how foreign national workers and their leaders could support this bill (and its predecessors) when the bill intends to reduce the foreign worker population down to zero. This is the same thing that the Variety claims is the intent of PL 15-108 even though PL 15-108 never had a provision in it to reduce the size of the foreign worker population down to ZERO. Go figure!]

FEDERAL Labor Ombudsman Jim Benedetto says the ability of foreign workers to transfer is guaranteed if S.2739, which includes the CNMI federalization measure, is enacted into law.

But he said questions about the implications of certain provisions of the bill can only be determined after the U.S. Department of Homeland Security adopts specific regulations.

The U.S. Senate is expected to deliberate and act on S. 2739 after their Easter break.

Under the bill, Benedetto said the U.S. Department of Homeland Security is tasked to establish, administer and enforce a system for allocating and determining the numbers, terms and conditions of permits that will be issued to each guest worker in the CNMI who will be considered as transitional worker.

Benedetto said this means that the department has to pass implementing regulations that should determine how many years transitional workers can work in the commonwealth, among other things.

“It could be a year, three years or five years. That has not been determined yet pending the passage of regulations,” Benedetto told Variety in a phone interview when asked about the length of stay of transitional workers.

He said the provisions of S. 2739 concerning the Northern Marianas should be implemented within a year after its enactment, but it also has a clause that allows the federal government to extend them for another 180 days.

But Benedetto said this is impossible to achieve given the islands’ small population, and this why the drafters of the bill inserted a clause to allow an indefinite extension of the federal guest worker program in increments of five years, subject to the approval of the U.S. Labor secretary.

“If the secretary of labor determines that such an extension is necessary to ensure an adequate number of workers for legitimate businesses in the commonwealth, the secretary of Labor may, through notice published in the Federal Register, provide for an additional extension of up to five years,” a portion of S. 2739 stated.
Posted by CNMI Blogger at 12:52 AM 1 comment: 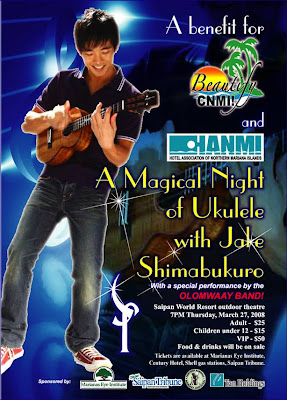 Angelo has a post on this Fundraiser Concert here.

For Olomwaay fans, the great news is that Olomwaay will be opening for Jake. Brothers Gus and Cris will be teaming up with Brother Benji Limes to jam some original Olomwaay tunes that we hope to release soon.