Washington Rep Pete A. Tenorio invited the House and Senate members to host a breakfast meeting with Chairwoman Donna Christensen and her entourage this morning. We were asked to arrive early so that the meeting could begin promptly at 7:30 a.m. I arrived a few minutes before 7:30 expecting a roomful of bright-eyed and bushy-tailed people. But, nope. Only the Speaker and a few lawmakers were there. This gave me a chance to get settled in, grab a hot cup of java and find a seat. I settled on a table with the House legal counsel and the lone representative from Rota, Rep. Chris Ogo, when I heard a slight commotion.

As I looked towards the door, I noticed that the DC contingency had arrived. I saw Speaker Oscar Babauta speaking with Chairwoman Donna Christensen. I walked over to them and waited for an appropriate moment to introduce myself. My initial impression of Chairwoman Christensen is that she's a serious woman who's here to do a job and she's going to make sure she gets the job done.

I gazed over at the rest of the staff who came in behind her. Some looked familiar; others didn't. I'd met some of them during their trip here a few months ago. I recalled meeting and sitting next to a very down-to-earth lady with a friendly face. She introduced herself as Anne Fischer. It turns out she is a JAG Navy Commander sent to escort the group then and now. I've always said that I could sense people's vibes and can tell within minutes of my meeting that person if we're going to be fast friends or mere acquaintances. Anne and I clicked right away. We chatted away over our bento lunches when we met months ago and we greeted each other warmly when we saw each other again this morning.

The next person I met was Congresswoman Madeline Bordallo of Guam. This was the first time we met, and I was surprised when she made mention of my being the "only woman" in the House of Representatives. I didn't expect her to notice, but she knew of this small piece of trivia. Congresswoman Bordallo greeted me with a warm hug and gave me the impression that she was happy to be in the CNMI. I picked up the same good vibes from her as I described above.

On my way back to my table, I ran into Senator Maria Frica Pangelinan. After chatting briefly, she and I decided to join Representative Arnold Palacios at a nearby table. As we sat chatting, Tony Babauta, the lead staff from Chairwoman Christensen's staff, came up to me and invited us to join their table. Seated at the table were Speaker Babauta, Chairwoman Christensen, and Congresswoman Bordallo. I took the seat right next to Congresswoman Bordallo, who was a delight to chat with.

Speaker Babauta gave his opening remarks and introduced all the House members. I always cringe a bit when he introduces me..."And, now, I'd like to introduce our one and only woman in the House, Representative Cinta Kaipat...." Yes, I'm the only woman out of 18 House members, but I don't want the extra attention. He made a few short remarks before turning the mike over to Senate President Joseph Mendiola.

Senator Mendiola introduced the Senate members who were present, and made the same fuss over Senator Maria Frica Pangelinan also being the lone woman in the Senate. Senator Mendiola spoke about the House Bill and the need to take into account what it would mean to overwhelm the Commonwealth with foreign workers and their dependents (spouse and child) which, by his estimation, could mean an influx of 40,000 people into the CNMI. I saw Chairwoman Christensen taking notes on her yellow notepad. After Senator Mendiola finished, they asked if anyone else had anything to say. I looked around, no one had their hand up, so I raised mine. I figured that this was going to be my only chance to say my piece in front of this group, so I may as well make the most of it.

I will tell you what I said in an upcoming post.
Posted by CNMI Blogger at 11:54 PM 22 comments:


The Saipan Tribune recently gave front-page space to inflammatory quotes from a labor organizer about HB 15-38, the labor reform bill that passed the House. It is evident that Ms. Wendy Doromal, the labor organizer who provided the inflammatory quotes, never read the bill. Her conclusions are wrong and have no support whatsoever in the provisions of the bill that passed the House.

Exit provisions continue past practice. The Commonwealth had an exit provision covering all foreign workers that was allowed to expire. The three-year exit was never enforced, and the provision was allowed to expire although it was clear that this would lead to calls for green cards from foreign workers. For Ms. Doromal's edification, there is nothing strange, inhumane, or immoral about an exit provision. In fact, the United States has a similar exit provision. For example, even foreign doctors who have trained in the U.S. for 10 years, married, had children, and completed their education, are required to leave for one year before they can be readmitted to continue working. The U.S. requirement of a one-year absence has been in effect for decades. The Commonwealth softened this requirement to six months.

Planned travel does not adversely affect children. It is just inflammatory to suggest that a six-month leave adversely affects the children of guest workers. Military families move from place to place as often as once a year. Workers in U.S. companies who are transferred overseas take their children out of school and pay tuition in a foreign country. Foreign workers here in the Commonwealth support children in the Philippines. The important factor is not the move, but time to prepare for the move. The bill provides three years to make the necessary arrangements.

Replacements with local workers. We in the Legislature have an obligation to provide job opportunities for our citizens. Foreign workers are a supplement to our labor force. Jobs for them should not be protected at the expense of job opportunities for our local citizens. The periodic exit provision will cause employers, in some instances, to try out a local citizen for a job opening. It is true that if the local citizen is qualified and works out, the employer will not re-hire the foreign worker.

Help for the economy. Your article quoted a lawyer who represents foreign workers to the effect that the bill “has nothing whatsoever to help the economy.” That lawyer either hasn't read the bill or doesn't know anything about the Commonwealth's economy. For example, the bill softens the impact of the moratorium on businesses so that local businesses that have opportunities to expand can readily find workers. For another, the bill provides better bonding of employers for their obligations to foreign workers so that this burden does not come to rest on the taxpayers. For another example, the bill provides improved education of foreign workers and airport screening to prevent exploitation. For another example, some of the most common labor paperwork will be moved to the Internet for easier, cheaper access by businesses. For another example, each foreign worker will be covered by medical insurance making the payment of CHC's bills much more certain. I could go on at some length about the economic benefits that will result from this bill.

Support from the business community. The Chamber of Commerce supports passage of the labor reform bill. They have urged some changes, as have many other people, but they do not oppose the bill as a whole. This bill has been handled responsibly by the Legislature. We had a task force that worked for over a year to forge practical compromises. We held public hearings. We had educational sessions for the legislators. After the bill passed the House, the Senate leadership has allowed a month for additional comments and proposals for change. The labor bill has to balance the interests of citizens, businesses, and foreign workers. It does that. The labor reform bill is an excellent piece of legislation.

We held this event months ago, but it was so much fun that when I came across this video on You Tube, I knew I just had to share it with you all again.

Judge Ken Govendo, Angelo Villagomez, and I had such fun judging this event. It turned out to be such a huge success that we're doing it again next year.
Posted by CNMI Blogger at 4:05 AM No comments:

What Is Beautify CNMI!?

Many people are asking to know more about Beautify CNMI! One such opportunity to introduce Beautify CNMI! to the world came when Katie Busenkell, PAWS President and chairwoman of Beautify CNMI!'s Animal Welfare Committee, asked Angelo Villagomez to put together a short intro piece on Beautify CNMI! that she could present at her conference in American Samoa. Thank you Katie and Angelo. Captain Carl even liked this piece.

By the way, we have a longer version that we played at Beautify CNMI!'s one-year anniversary in April. Those of you who are curious can find that on You Tube.
Posted by CNMI Blogger at 2:37 AM No comments:

Our Visitors From Israel and Switzerland 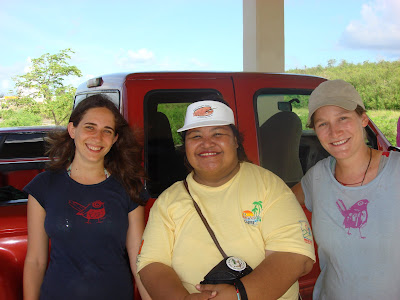 In July, Beautify CNMI! welcomed some new international friends who joined us in some of our activities. Neta, from Israel; Rep. Cinta Kaipat; and Flurina, from Switzerland. These two ladies participated in the Koblerville flame tree plantings that Beautify CNMI held last month (July). Thank you, friends. 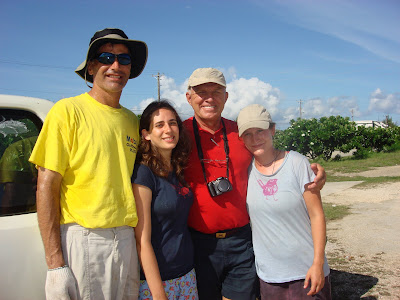 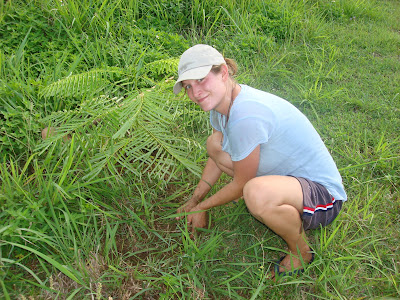 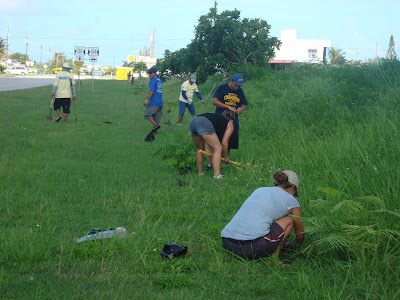 Beautify CNMI! volunteers working side by side to help transform the Kobler Substation into a truly beautiful site to behold. We should start to see some blooms in about three or four years. 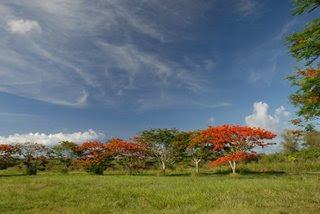 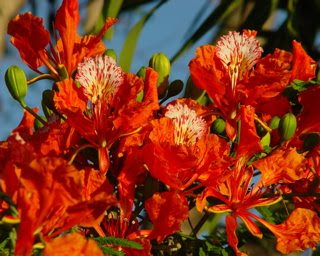 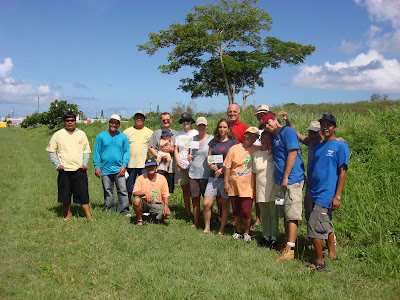 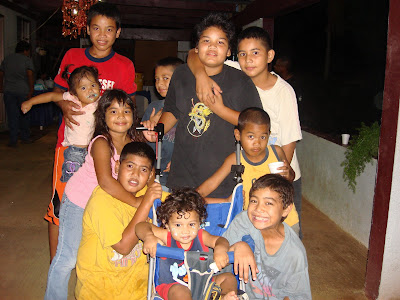 Kadie and her posse. 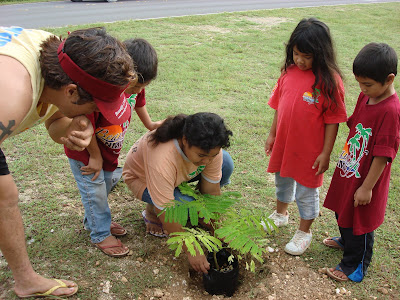 Helping out in the flame tree planting at the Airport Football Field. 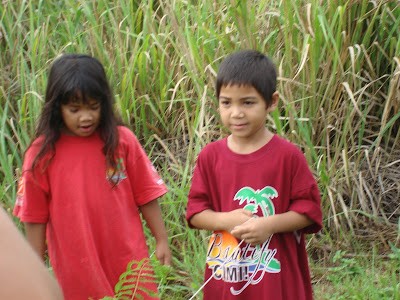 Kadie and Jun helping measure the distances between each hole to be dug for planting. 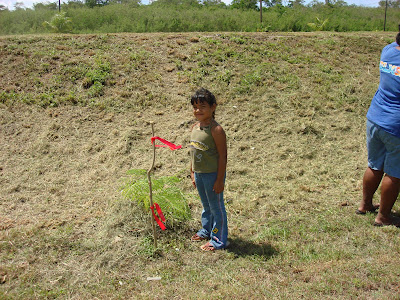 Kadie proudly displaying one of the newly marked flame trees planted at the Koblerville Substation.
Posted by CNMI Blogger at 11:57 PM No comments: 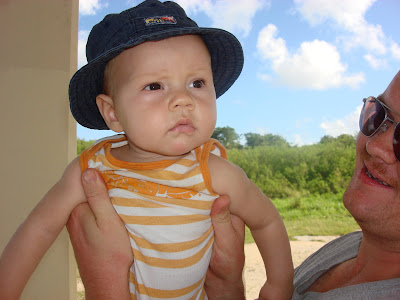 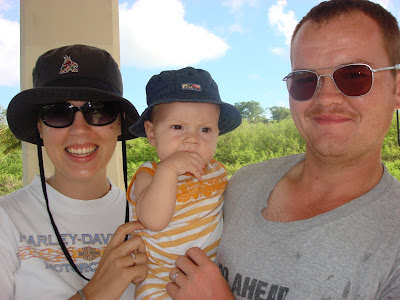 Meet my new friends -- Missy, Connor, and Jim. They are the newest Beautify CNMI! volunteers who helped us plant flame trees at the substation in Koblerville. 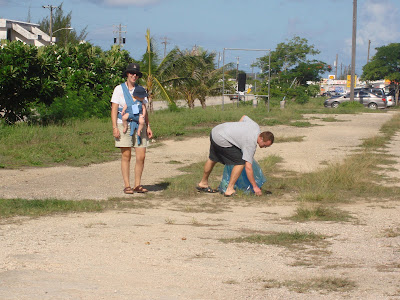 Oh, yeah -- they didn't just help us plant flame trees; they helped pick up trash, too. 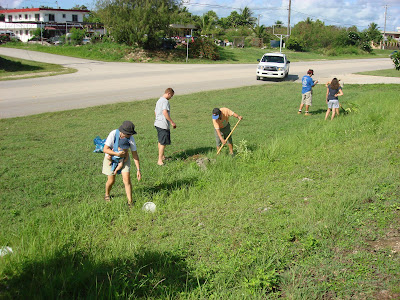 Missy and Connor going for that run-away paper plate while Jim helps plant some flame trees. 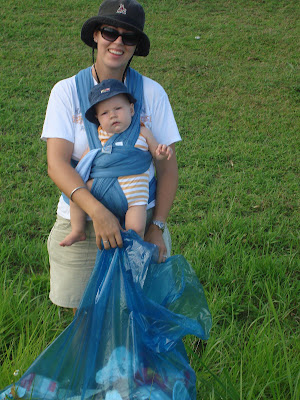 Connor says, "Hey, wait a minute! I thought we were going out for a nice Sunday brunch?!" 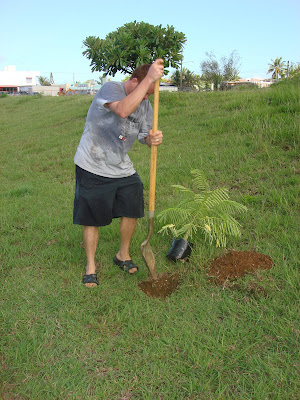 Jim contributing to the transformation of Koblerville Community. 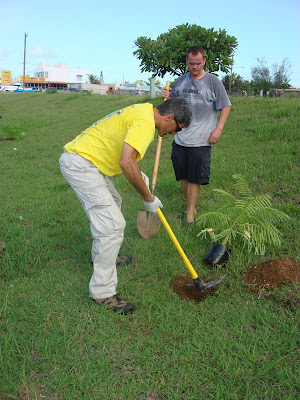 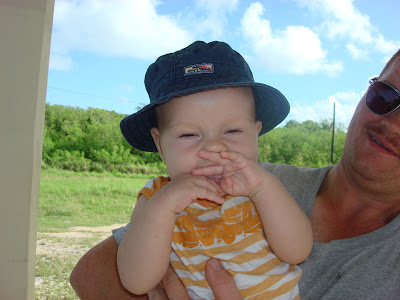 "Okay; you wise guys. I'm tired and hungry. Can we go home now?" Thanks, Connor. Thank you Missy and Jim. Please join us again when you find some free time.
Posted by CNMI Blogger at 10:15 PM No comments: