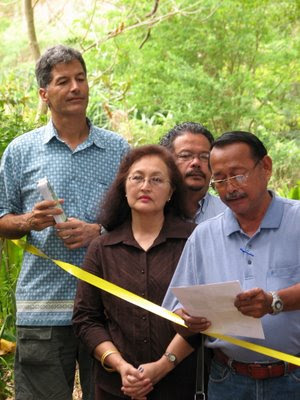 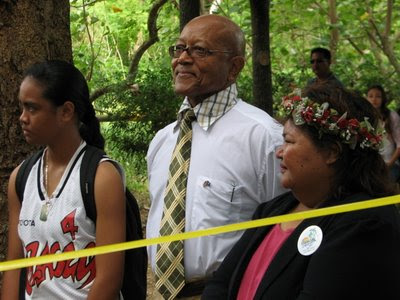 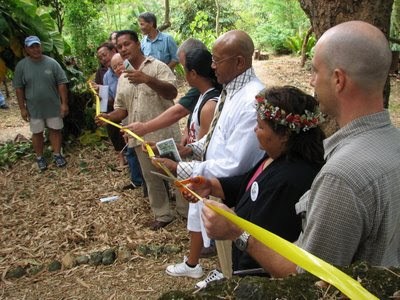 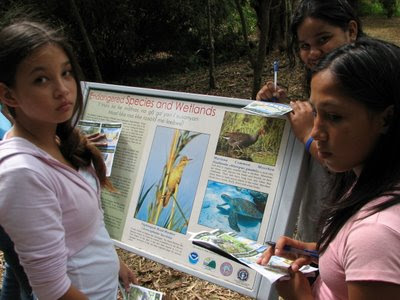 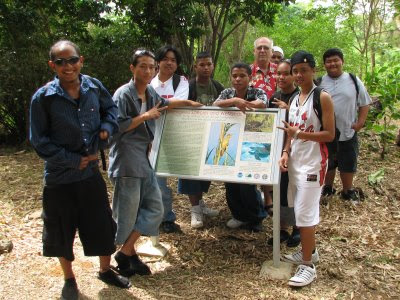 (All Photos Courtesy of Angelo Villagomez)
Following my meeting with the Kagman Komunidat and agencies, I rushed over to the ribbon-cutting ceremony at Education Island in Kagman. I must say that I was so pleasantly surprised to find such a beautiful place available for students and others to visit and learn about the wetlands and the environment in general. It's also a nice place for our tourists to visit. Perhaps my good friend Angelo Villagomez can post it on the Beautify CNMI! Blogsite's list of beautiful places.

Many folks were there. Beautify CNMI!'s super volunteer group Friends of the Mariana Islands (formerly MOVER) were there lending assistance. Thanks to RC&D and EVERYONE for making this great event possible!
Posted by CNMI Blogger at 6:37 AM No comments:

On Tuesday, January 30, 2007, I attended a meeting involving the Kagman Komunidat, DPS, DLNR Forestry, and others to address road safety concerns in Kagman. It appears that a lot of the secondary roads have been neglected and there's a lot of overgrown vegetation that have been turning two-way streets into one-way streets. This is a major concern as it puts everyone's safety at risk.

At our meeting, DPS showed a video of the roads that need to be cleared and, since this is a safety issue, we all agreed to tackle this issue head on ASAP. On a designated day soon, a group will pick up the trash, followed by the heavy machinery (tractor mower and such) to mow the grass and remove invasive foliage. The trash trailer will follow to pick up the litter bags. Sounds like a plan.

We have a lot of preliminary work to do until then!
Posted by CNMI Blogger at 6:14 AM No comments:

Making A Blog Through 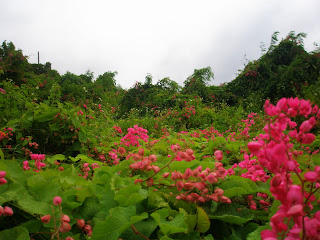 For my two blog mentors, posting pictures on their blogs has become second nature. In fact, they practically do it in their sleep. But for this real novice, acquiring such skills which enabled me to post these first pictures is what I'd call "making a blog through" (note to the confused--that's "blog speak" for "break through"). I haven't yet learned how to post captions and do some of the fancy things that my blog mentors can easily do, but I remain hopeful. So, stay tuned!
Posted by CNMI Blogger at 12:38 AM No comments:

As Gonno Road Clean Up 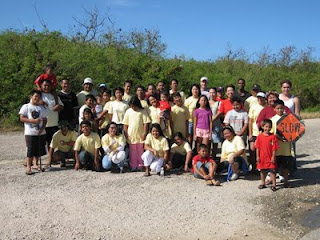 Further energized by the mega success of the Palo Potu-led road clean-up, Beautify CNMI! decided to tackle As Gono Road, the other road that intersected Tun Kioshi Road and goes all the way past Coral Ocean Point. This clean-up was led by Rep. Cinta Kaipat and staff and other regular super volunteers of Beautify CNMI!, such as Friends of the Mariana Islands (formerly MOVER), dynamic mom and son team of Juanita Fajardo and Adam Sablan, and Ian Catlett. Pala Potu also joined the clean-up, as did our Korean volunteers from Saipan International and ISA CNMI from our Japanese community. We were joined later by Angelo Villagomez and Walt Goodridge, another welcome addition to the Beautify CNMI! family.
We picked up trash alongside the road and worked our way to Coral Ocean Point. While at Coral Ocean point, I met a gentleman who named Jimmy who informed me that he was getting his Palauan group together to join Beautify CNMI!. GREAT! More infections with the Beautify Virus!
Meanwhile, the truck was loaded with trash bags, so the first truckload had to be temporarily unloaded at my mother's house so we could load up the rest. (Thanks, Mom!) The rest of us continued on towards Kobler Elementary School and on to the four-way intersection. At Koblerville Elementary, we found and removed a lot of trash strewn around and through the chain-link fence. Everyone agreed that it looked so much nicer with all that trash gone.
Also, while most of us were picking up trash, some members of the Pala Potu Group continued their fine painting of drainages and curbsides. They sure look so much nicer and brighter! Great Job everyone!!!
After our morning clean-up, some of us got together at Marites' house for a bbq and some karaoke singing. Yep! We still had energy left for all that! And a good time was had by all, indeed!
Donors To Thank: Rep. Cinta Kaipat for the water, gloves and trash bags.
P.S. This clean-up yielded a total of 920 lbs of trash collected and removed. Can you imagine that?!
Posted by CNMI Blogger at 10:50 PM No comments: 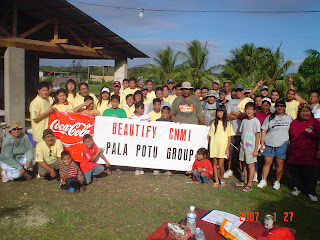 BIBA PALA POTU GROUP! Over 50 volunteers participated in the inaugural clean-up led by the Pala Potu Group Saturday morning. The Group's leader, Bernard Cabrera, deserves extra kudos for the fine job of organizing and leading this energetic and enthusiastic group. A few weeks ago, Bern came by my office and informed me that he was organizing two to three local families to adopt the Tun Kioshi Road from the airport all the way down to the As Lito Intersection. As some of you may know, it has been a goal of mine to incourage more of our local families to get "infected with the beauty virus" and join Beautify CNMI! Well, these folks sure started 2007 with a bang! Not only did they join Beautify CNMI!, but they took it a step further and adopted a road which they pledge to clean every last Saturday of the month! Way to Go, Pala Potu Group!

And while most Beautify CNMI! events begin at 8 a.m., by the time we got to our meeting point shortly before 8 a.m., it turned out that this enthusiastic bunch had actually begun the clean up as early as 7 a.m.! (Okay, some had extra incentive to start early because rumor had it that they had a softball game later that morning but, hey, that's okay, too!) As soon as we joined the group scattered along the road, my staff and I passed out gloves and trash bags and Beautify CNMI! Restoration Chair/MINA Executive Director/RCD Public Involvement Coordinator Angelo Villagomez soon showed up with the last of our yellow beautify CNMI! t-shirts.

The group picked up trash along the road, bushcut the weeds that surrounded the posts, and clearned out and painted the drainages. We later gathered at the Pala Potu Palapala for some sandwiches and refreshments and our group photo. All in all, it was a great day!

Thanks To Our Donors: Paint, paint brushes, rollers, pans, gloves and trash bags were donated by the Office of Rep. Cinta Kaipat; additional paint was donated by Sherwin Williams (thanks to Rep. Absalon Waki for arranging this!), and DPW for mowing the grass which made it easier for us to pick up the trash.

My crew and I were supposed to be at the beach beautifying at 8 a.m. this morning but, unfortunately, we turned into a sleepy household. Yawn....! (Apologies to all my fellow Beautify CNMI! beauticians out there beautifying for letting you all down!)

Everyone's tired from our full day yesterday -- and what an EXCELLENT day it turned out to be! The birthday party and my friends' return to the CNMI were properly celebrated. The kids swam and played in the water while the adults congregated under the pavilion and under trees to tell stories.

The reunion was just terrific! Hopefully, I'll get to post some pictures later when I get them. In any event, Lynne and Don look great and their three kids are just gorgeous. Some friends and I spent the afternoon and early evening eating, chatting, eating, drinking, eating, laughing, eating...well, you get the picture. Angelo, Walt, Dee and Scott were on hand to ensure that the celebrations were as fun and successful as they ought to be and were!

After we left the pavilion, the family went across the street to watch my nephew Byron and his Hustlers team battle for the championship title. Brother Gus and I took two of our nephews and went searching for food. Yes, we were hungry again! We ended up settling on pizza.

We returned to the baseball field and I joined the family in the stands. Rose Igitol came by and asked me if I would help present the players with their trophies following the game. Of course, I accepted! The audience clapped and cheered when the announcer called me out on the field and, of course, my family whooped it up as I was passing in front of them. I had to oblige and give a little (just a little) "slow-motion dance move." It was no Michael Jackson moon walk, for sure, but it made my family, the audience, and the baseball players laugh and that's what mattered!

In addition to his team winning the Championship, Byron also won the Golden Glove Award and led his team in RBI's. He shared the Doubles title with Jerome, our former neighbor, who also racked up all sorts of awards and was the team MVP. Woo-Hoo! Double Woo-Hoo!

CONGRATULATIONS to Byron, Jerome and the entire Hustlers team and coaches. WELL DONE CHAMPS!!!
Posted by CNMI Blogger at 9:13 AM 3 comments:

We're off on today's new adventure and random obervations about life in My CNMI!

Aaahhhh...this promises to be a great day! In a few hours, I will be gathering with friends and family for a combination 5-year old's birthday party/Welcome back celebration. It's drizzling a little outside, but no, no, no, NO Siree! Not gonna allow a little rain to dampen our spirits.

Yup! I'm pretty stoked about seeing my dear friend Lynne and her family again. She just arrived back on Saipan with her husband Don and their three gorgeous kids (Coleman, Sofia & Jesse) three days ago. Lynne and Don left the CNMI almost 10 years ago and now they're here again for six months. Woo-Hoo!!!

Okay, Let's Get This Party Started!

(This is for those friends of mine -- and they know who they are -- who've been bugging me almost daily to start this blog: Okay! Okay! Satisfied Now? :D )