My Most Recent Trip To Tinian

Hello. I'm back! The only thing that kept my trip to Tinian from being just perfect was the fact that I first went there for a sad occasion -- to attend my uncle Jose Borja King's funeral. Sunday morning, March 11, sister Cece, my niece Tati and I hopped on the 9:30 a.m. ferry and headed to Tinian. Brothers Gus and Bud joined us that evening. We attended the rosary at 8 p.m. and then went back to the hotel for a quick rundown of our songs for the funeral, which was held the next day.

It's not often that I get to see my kinfolks from Tinian and Rota, and it's unfortunate that this visit was prompted by my uncle's passing. Following the funeral, we decided that it was also best not to impose on our relatives. We figured they would be exhausted and the last thing we wanted to do was to show up at their house and then they would feel obligated to entertain us. So, Gus, Tati and Bud took the afternoon ferry back to Saipan, while Cece and I stayed for the Natural Resources Committee Public Hearing scheduled for 6 p.m. the following day (Tuesday, March 13).

By then, Cece decided to invite her husband Dave to come down to Tinian to join us. Dave came down with my cousin Joe on the 5 a.m. ferry early Tuesday morning. We decided to set out to discover and rediscover some of the beautiful sites of Tinian. Come along, won't you? 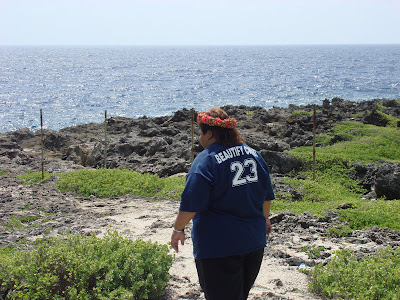 I'm at a popular tourist site. Can you guess where this is? Okay...give up? Look at the next picture. 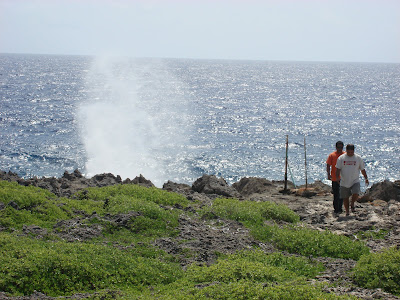 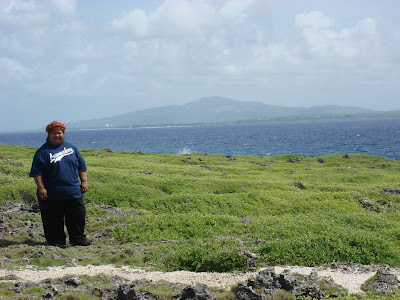 I usually stand on the shores of Saipan looking over at Tinian but, this time around, Saipan appears to me from far off in the distance. 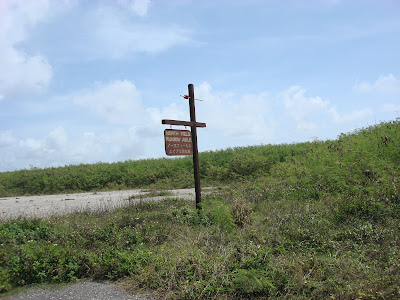 Among the sites we visited is the famed "North Field." Click on the photo to read the sign. 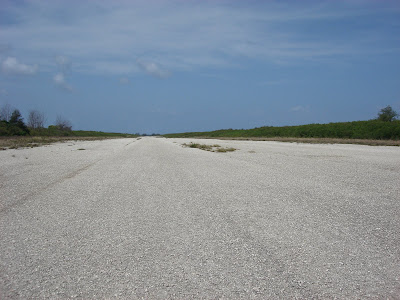 WWII history buffs will tell you that during WWII, this Tinian Airfield played such a significant role in the Battle. 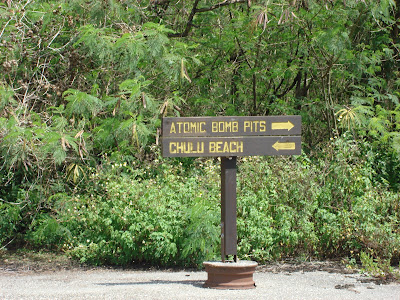 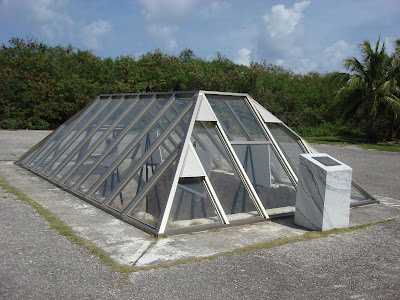 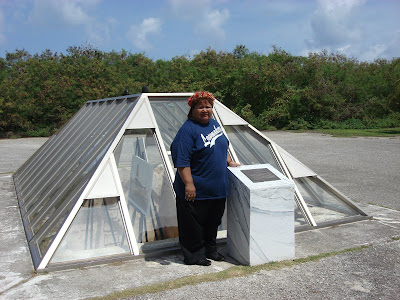 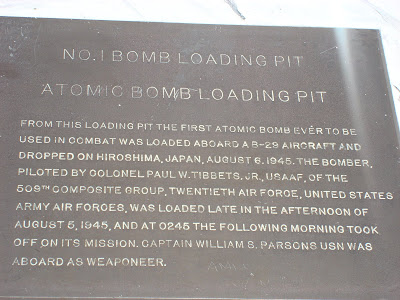 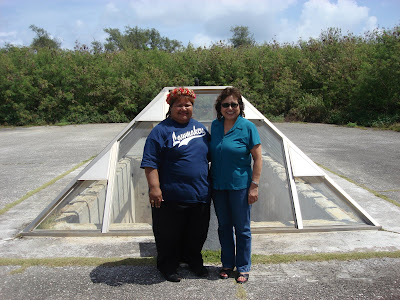 On my visit to Atomic Bomb Pit No. 2, I ran into Senator Maria Frica Pangelinan, who was also playing tourist with her husband and a visiting former lawmaker from New Hampshire. 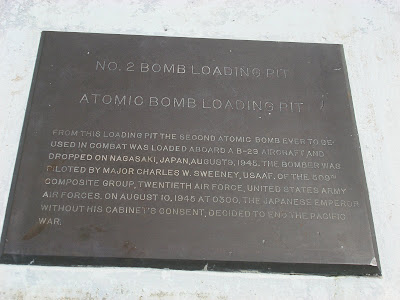 
As I stood in the hot afternoon sun at this important historic site, I reflected upon a very moving ceremony I had the privilege of participating in in 1995. The summer of 1995, my friend Lynne Bruzzese invited me to join a civilian group called "People of the Circle/Taotao Aridondu/Aramasaal Fawluul." That summer, the CNMI was a whirl of activities as preparations were in full swing to commemorate the 50th anniversary of the end of WWII. It seemed everything was geared towards highlighting the American victory over Japan during WWII. Our civilian group, on the other hand, was comprised of a large diverse group of peoples from all walks of life who felt compelled to unite to give another perspective of war--the heavy toll on civilian sufferings--which needed to be remembered and recognized as well.

I noticed that the famous Navajo Code Talkers (immortalized in the movie "Wind Talkers" in which Nicolas Cage starred in) were also invited to the CNMI to take part in the commemoration activities. Their bright, colorful orange-yellow uniforms, possibly the brightest ever worn by men in military, made this group stand out. I was amazed to learn that it was the Navajo language that the Japanese military could not break, which enabled the U.S. military to communicate successfully during the War.

Meanwhile, we were dismayed to learn that our group had been denied access to the Bomb Pits. Our only recourse, we felt, was to communicate our displeasure to Washington in the local papers. The papers interviewed me, as well as a couple other friends, Beret Strong and John Tweedy. I subsequently learned that the Joint Chiefs of Staffs in Washington, DC, had to convene a meeting to decide whether to grant us access or not. The activities were already in full swing and we couldn't afford to wait for the final decision. So a bunch of us boarded the planes and went to Tinian anyway.

An interesting thing happened at the commuter terminal on Saipan, by the way. Brother Gus brought by this one passenger whom he introduced to me as one of our Borja cousins from Tinian. I learned he was a cop. When we arrived at the Tinian airport, I met the Tinian Chief of Police. It turned out he was my Uncle Gil Borja, whom I just met for the first time.

As my group of men, women and children left Tinian airport, we noticed that the police car seemed to follow us for a short while and then dropped off. We figured they eventually realized that we weren't the radical "anti-nuke protestors" some people were trying to portray us to be and decided they had better things to do.

Thanks to our good friends Lucy Blanco-Maratita, Florine Hofschneider, and the awesome Tinian Women's Group, arrangements were made for a lovely and moving Peace mass at the Tinian Church. This was a special mass not only because of the occasion, but also because of our special guests who joined us for the mass.

A surivor of the Atomic Bomb and a son of another surivor heard about our group and sent word that they were traveling from Japan to come and join our Peace ceremonies. They did just that and that is how I first got to meet my friend Mr. Horiguchi-san, who served as the translator for our special guests.

Following our mass, we gathered outside the church and formed a circle under a big tree. At precisely the same time that the Atomic Bombs were dropped on Hiroshima and Nagasaki, each of us walked to the middle of the circle and poured water into a pan. This was done in a very quiet and solemn manner. Many tears were shed quietly as prayers were said silently in rememberance of what happened 50 years before. A Guam PDN reporter was sent to cover the story.

When our "Water Ceremony" outside the church concluded, we got in our vehicles and convoyed over to the Atomic Bomb Pits. (The pyramids shown in the above pictures hadn't been built yet.) When we arrived, the place was crowded with all sorts of people, including the Navajo Code Talkers and other WWII veterans. We gathered under the tents and then proceeded with the completion of our "Water Ceremony." We watched as our special guests from Japan went up with the water that we poured into the pan and poured it over the Bomb Pits.

The significance of this "Water Ceremony" really moved me and has stuck with me all these years. It's not something I could easily forget. I understand that when the Atomic Bombs were dropped, the victims, many of whom had their clothes and even their own skins burned right off their bodies, kept calling out "Water!" "Water!" Hence, the act of pouring the water over the Bomb Pits is, in a way, a symbolic gesture of aid to the unfortunate victims of the bombings.

I recall the same hot sun beating down on us as we gathered in a circle--me, Gus, Lynne, Manny Borja, the late Retired Justice Ramon G. Villagomez (Angelo's father), Lucy, Florene, John Tweedy, and many more of us, including children. We sang songs of peace, cried more tears in rememberance, and prayed for Peace.

This year will mark the 12-year anniversary of our visit to the Atomic Bomb Pits. I will forever remember the summer of 1995 not only for the special Peace ceremonies we held, but for blessing me with some really great, quality friends whom I've remained friends with today. Friends like Horiguchi-san, Matt Smith, Ron Smith, David and Mara Khorram, Artin and Roya Mahmudi, Toukie Mojica, Anna Cabrera-Baer, and, of course, my dear friends whom I was already friends with pre-People of the Circle, such as Lynne Bruzzese, Beret Strong and John Tweedy, Manny Borja, Lucy Blanco-Maratita, Florine Hofschneider, the members of the Tinian Women's Group, and more. And, finally, I'll always remember the late Justice Ramon Villagomez ("Justice V") for his passion and commitment to Peace.

On a recent Beautify CNMI clean-up at Mt. Tapotchao, I happened to notice that one of our tiny monuments that says "May Peace Prevail On Earth" still stands today. I believe there's another one at Banzai Cliff. Seeing these monuments always evoke warm memories of that special summer I had with some of the best people GOD ever put on this Earth. May Peace Prevail On Earth!
Posted by CNMI Blogger at 7:20 PM

I wanted to show you this when we had our Tapachou cleanup, but I forgot:

Cinta: I'm sorry to hear of your uncle Jose Borja King's death. Our condolences to you and your family and relatives here on Saipan, and there on Tinian and Rota.

Thank you SO much, Steve! My family and I truly appreciate your words of encouragement and support. It's good to have super supportive friends like you!

I'm so sorry to hear about your uncle too=( Praying for you and your family. Miss you! See you soon.

Thanks for your kind words. I miss you, too! Welcome back!

I did not know about the 1995 water-pouring ceremony at Tinian nor about the difficulties you had in attending the ceremony, and I was moved by your story. As a person who grew up in Saipan, and as a history researcher and speaker of Japanese, I have attended many war rememberance ceremonies in the NMI but never had the chance to see one such as this! Thanks for the story and my sincere condolences for the loss of your uncle this year. -J.Jordan