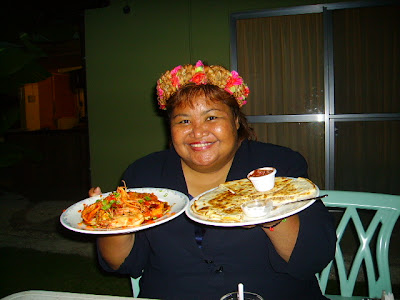 Aaahhh...After the public hearing, we sat in the backyard enjoying Mony's outstanding "Shrimp ala Mony" and Chicken Quesadillas. Order these and you won't go wrong! 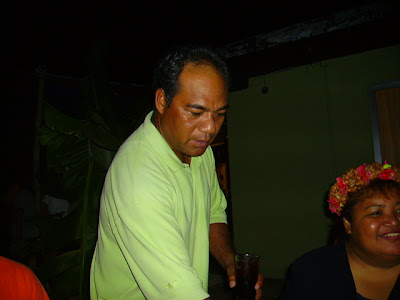 This is Mony, who not only picked us up when we arrived on the ferry and took us to the Hotel, but here he is bartending for us also. Mony wears many hats. 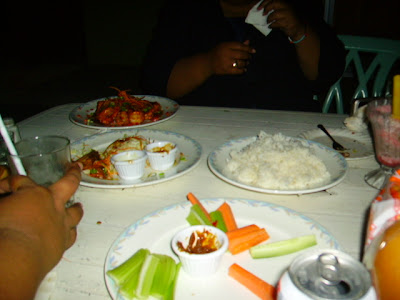 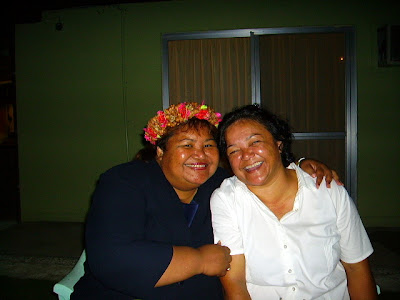 Debbie's big heart is as big as her smile. No doubt, our stay at The Fleming Hotel was enhanced by the personal service from this terrific lady. She is Tinian's "other best-kept secret." Debbie is the youngest of the Fleming brood. She now runs the Hotel with a staff and spends her time doing anything and everything from the crack of dawn to, well, the crack of dawn. This woman is amazing! She doesn't need much sleep. She is like the Energizer Bunny! 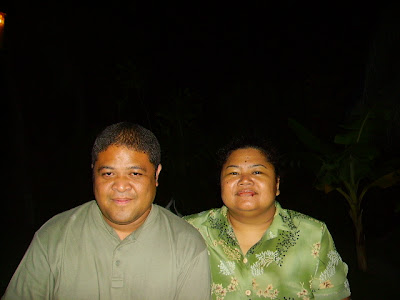 Dave & Cil having a good time. 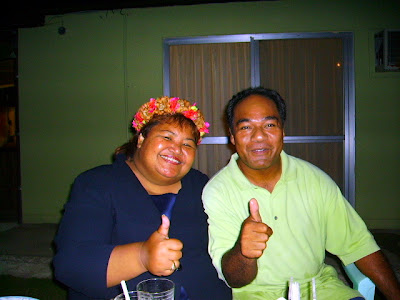 So how was that "Shrimp ala Mony"? 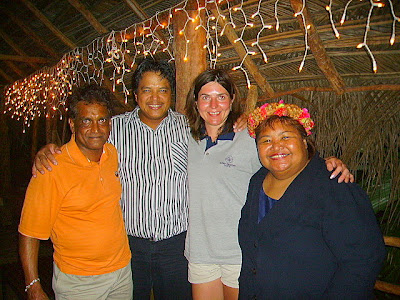 Guess who I ran into on Tinian? Okay, other than Senator Jude Hofschneider, who stopped by The Fleming Hotel. Yep, I'm talking about Das, the gentleman in the orange shirt. Yup. I knew Das from when he used to work for the Dynasty Hotel and had booked Olomwaay (the family band I managed) to perform there a couple times. It was good to see Das in Tinian. He now works for World Resort on Saipan and said this was the first trip he made to Tinian in a year. That's his friend Natasha from Russia and me. 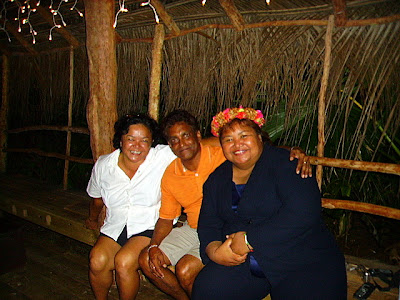 Debbie, Das, and me 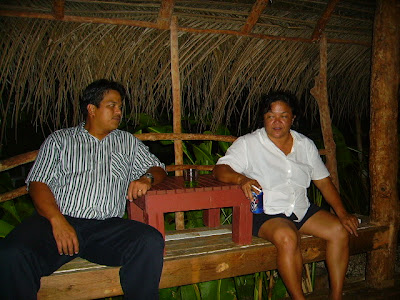 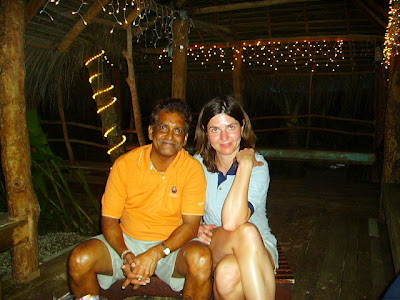 Das and Natasha, right before he got this idea in his head that we should go for Tepanyaki at 3 o'clock in the morning. Debbie's brother-in-law Don Coward joined in and said he'd treat us to a late, late, late Tepanyaki dinner and early, early, early breakfast. I declined, of course, as my bed was calling to me, until Debbie exclaimed, "Come on; we're doing this in your honor!" My bed. Tepanyaki at 3 a.m. My bed...Tepanyaki! 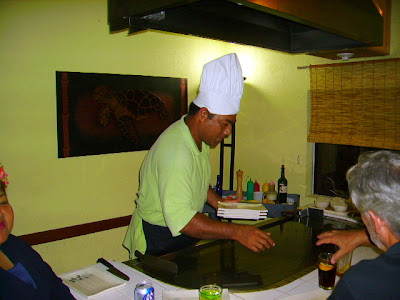 Yes, you guessed it. Here's Mony wearing his "Chef's hat!" I'll let the pictures tell the rest of the story. And yes; I did say 3 a.m., folks! 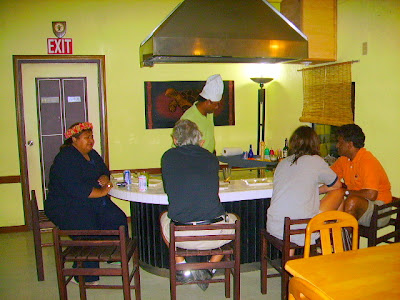 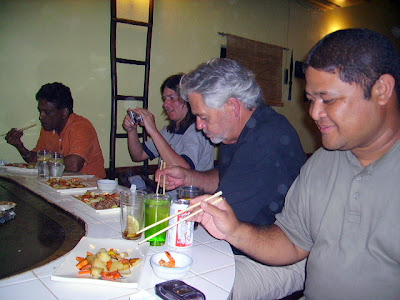 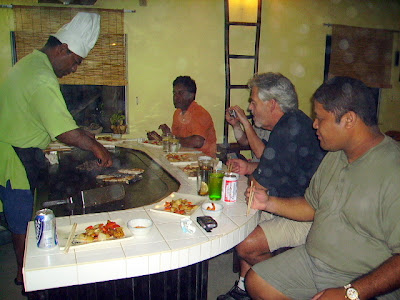 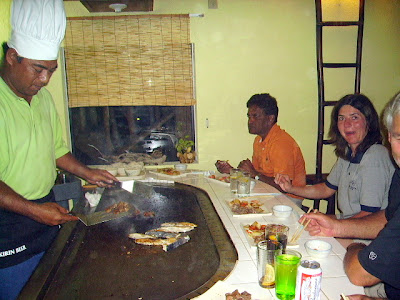 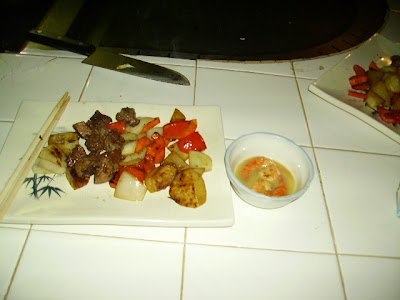 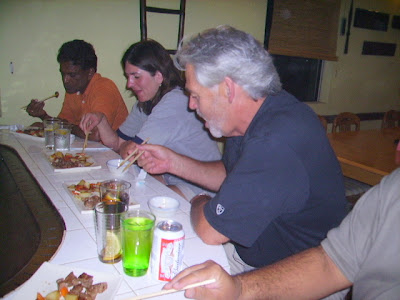 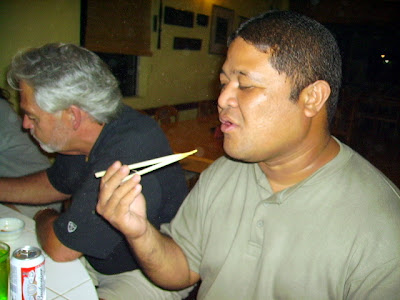 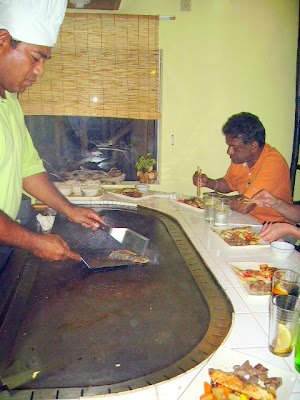 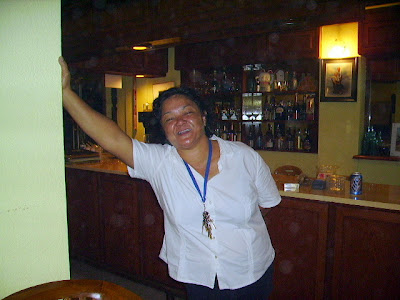 Our gracious hostess hovering around us, catering to our every whim! :) Thanks also to Don for the treat!!! I'm posting below part 1 of 2 videos. I'll post the second video later.