The Person Who Inspired The Tree-Trimming Workshop 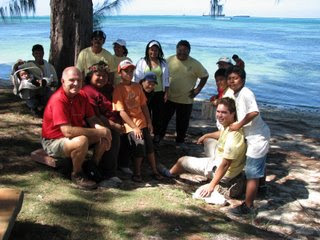 Photo Courtesy of Captain Carl Brachear
Captain Carl Brachear (in red shirt) and Beautify CNMI! Friends at the Seashore
Before I launched the Beautify CNMI! campaign, a member of the CNMI community whom I had met at a Passion Profit Seminar used to call my office and complain passionately about the trees that had been "butchered" by some of our government agencies for one reason or another. The responsible agency often cut the trees that obstructed the power lines with little or no consideration to anything else but that which they are mandated to do. The same thing is true of the other agencies, but for their own specific reasons. For instance, an agency may decide to cut down a tree or a branch for safety reasons. Anyway, this irate citizen, who has since become a good friend of mine, would insist we take a drive around the island of Saipan as he'd point out these grievances. In fact, thanks to him, I can't look around our islands anymore without noticing tree stumps! Thanks -- I think. (More on this later in another post.)

Fast forward 10 months later to January 31, 2007, and here we're conducting a proper tree-trimming workshop involving those very agencies responsible for cutting down trees. As I told Roland, the instructor, what I'd like to see accomplished from this workshop is to get the tree trimmers to meet their respective mandates to provide power or establish safety while not harming the trees and at the same time ensuring safety of the citizens.

Well, Captain Carl Brachear provided the inspiration for this training. Thank you, my friend!
Posted by CNMI Blogger at 5:17 AM