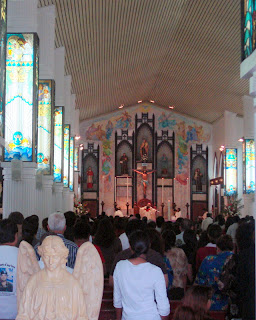 On the way to church, I contacted my office to request that the Governor recognize/include Jesse Castro in his rememberance of the CNMI sons who lost their lives in Iraq. This was a promise I made to Jesse's mother Doreen, widow Theresa, and sister Lisa who all came up from Guam to attend Adam Quitugua Emul's funeral. I kept my fingers crossed that Charles Reyes, the Governor's press secretary, would be able to work his magic on the Governor's speech as I proceeded to church. I got there before 7:30 a.m.

We sang for a couple of hours in tribute to Lee Roy during and after the Responso and rosary services. Aye Adai... It's hard to hold the tears back, let alone sing through the grief all around us. Sigh....!

Sudden death is something my family is all too familiar with. My father was killed when I was 10 years old and I lost a brother in 1992. Both happened suddenly, so unexpectedly, in hugely dramatic and traumatic ways that have affected our lives even today. Yes, this pain is all too familiar. How I hurt for these families who are now going through this endless nightmare. It's going to be a long and rocky road. GOD, I pray for their strength to go on even though the path will be long and difficult.

From where I sat, I kept glancing over at this painting of Lee Roy every time I looked over at his casket. 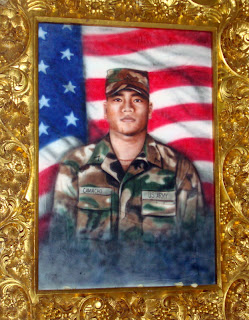 I didn't realize it was a painting until the funeral attendants started to move it out of the church to get it ready for transport to the chapel at the Veterans Cemetary in Marpi.

After a brief break for breakfast, we were summoned back to church for the 10 a.m. official presentations. The presentation began with our singing of the CNMI National Anthem, followed by a speech from the Governor. The Governor's speech was touching. More importantly, he INCLUDED JESSE CASTRO among the CNMI sons who paid the ultimate sacrifice for their country. We shall never forget Eddie Chen, Wilgene Lieto, Derence Jack, Adam Quitugua Emul, and Lee Roy Apatang Camacho. The Washington Rep, Pete A. Tenorio, also gave a brief speech, followed by the presentation of resolutions to the family by members of both the Senate and the House, 15th Commonwealth Legislature. I was sitting with the choir when the lawmakers were invited up to present the resolutions. I went over to join my colleagues after I saw the Speaker beckoning me over. The military also presented the family with several medals, including the Purple Heart. We sang "America The Beautiful" after the official presentations concluded.

Gus took these pictures and made the accompanying comments [in italics]. The first one below shows Lee Roy's children and family as they headed out of the Mount Carmel Cathedral after mass to escort Lee Roy's remains to the burial site. 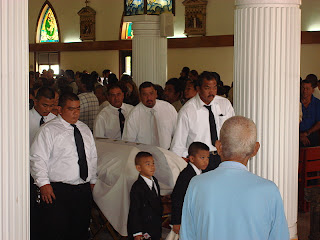 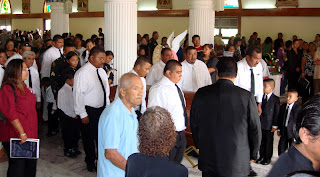 Cpl. Lee Roy Apatang Camacho was buried at the CNMI Veteran's Cemetery up in Marpi. It was a long and tiring day for everyone. I would like to thank those who ... worked so hard to make [this] funeral service a memorable one for our fallen hero.

Let us continue to pray for those who are still in harm's way. 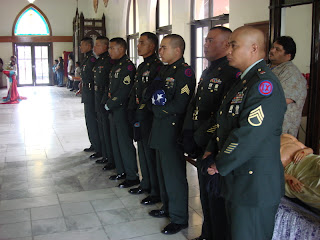