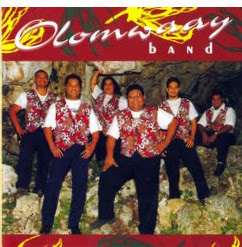 Gus Kaipat, front-right, Leader and Voice of Olomwaay
The Olomwaay Band, formed in 1995, broke into the island music scene when it won the grand prize for the first annual Battle of the Bands in 1998... Solid as a bond - - But local fans simply know Olomwaay as the name of their favorite band that gave them the popular local hit She Gave Us Love. Experience the versatility and emotion of one of the best bands the South Pacific has to offer!
*"...People were requesting it so often that the station manager at a local station had to limit how often it was played to be fair to the other artists."--Gus Kaipat, from a Saipan Tribune article
Hello, there! The above write-up appears on the Olomwaay website (http://www.olomwaay.com/). Olomwaay recently received a cd order from someone in Sweden! Cool!
Olomwaay welcomes Herr Bertil Larsson from Sweden! Thank you for your interest in Olomwaay's music. Your cd is on its way! I hope you like our music. *Congratulations* on becoming Olomwaay's 1st fan from Sweden!
By the way, "She Gave Us Love" is the hit song that I watched my brother Gus compose in 15 minutes or less. The song is a tribute to our dear mother, whose love sustained us all throughout all our struggles after my father was killed when we were still very young. Our mom clearly was and still is the "wind beneath our wings." This cd contains two songs -- one in English, the other in Chamorro called "Ta Baila Na Dos." It's an upbeat cha-cha song, which you'll need to listen to after the melancholy tune of "She Gave Us Love."
I actually stumbled into producing this album quite by accident. (Another story for another day!) When the album came out, it sold 2,000 cd's in 3 days! Not bad for a rookie producer, eh?
My life took a dramatic turn when I entered politics and assumed office in January of last year (2006). But no matter how busy life is these days, I don't ever want to lose sight of the other important things in life, like music, family, and good friends.
Posted by CNMI Blogger at 4:07 AM