Okay, this is going to be a bit of a long post because of the pictures, but at the end of the pictures, I answer "Concerned's" inquiry regarding the meeting with Secretary Kempthorne. So, if you're impatient to read how it went, just scroll to the bottom of all the photos. Otherwise, carry on... 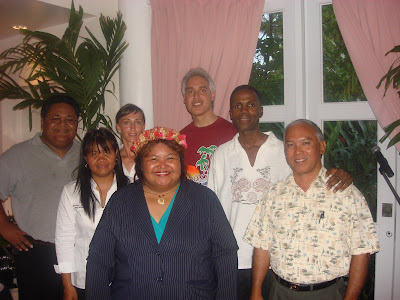 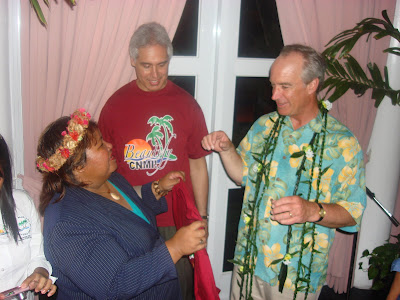 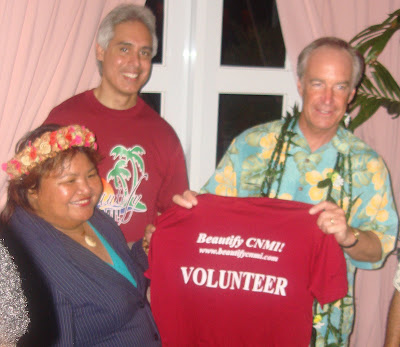 I joked that Mr. Cohen owes me 10 cleanups for the t-shirt I'm presenting to his boss and his boss said "Make that 20!" 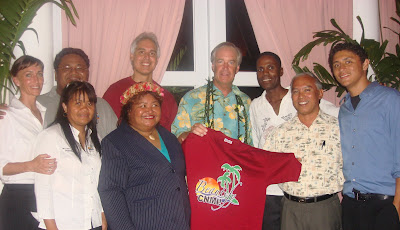 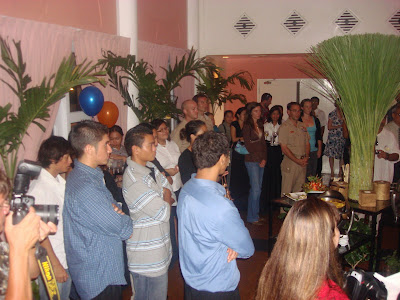 Forefront: Mt. Carmel School students who were there with their Principal, Galvin Guerrero (The students will graduate this Saturday at 6 p.m. at the Cathedral--so you all should come to that!) and new NMC Pesident Carmen Fernandez. 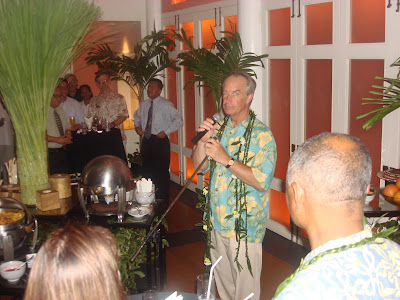 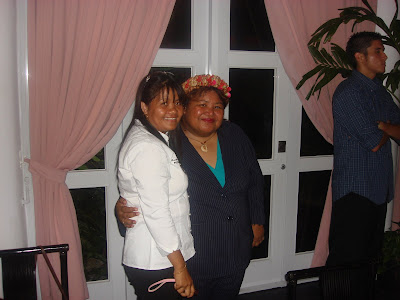 
One of my visitors left me this message on yesterday's post, and I promised this response.

Concerned said...
so what issues did you raise at this very important gathering? i would love to hear the details on the questions that you posed and the responses that were given. having him available for direct questioning doesn't occur often.

Thanks for your question. After he went around the room meeting people, Secretary Kempthorne then addressed the room. He mentioned that although this was his first visit to Saipan, that his father fought on Saipan and Tinian during WWII. After his brief speech, he opened the floor for questioning.

I was the first to take him up on his invitation and, after welcoming him and his entourage, I launched into my Q&A and raised the following issues:

1) Our islands are comprised of active volcanoes that are still errupting. Our air space is busy with air traffic. The safety of air passengers, incuding our people and visitors, are very much at stake. [I say this because an ash plume can be mistaken for a cloud and if the ash gets in the airplane engines, it can be disasterous! Three 747 jet airliners dropped out of the skies before the pilots were able to recover and prevent these major disasters. (Info provided by USGS scientist Dr. Jim Quick at one of his volcano monitoring presentations to Pagan Island residents (in the islands north of Saipan) and the Legislature.)]

2) With the military coming to Guam, this airspace is going to get even more crowded. The military will also have an interest in ensuring that the military jets are flown in safe skies.

3) We have volcano monitors sitting in a warehouse in the States awaiting shipment to the CNMI for installation. Having those monitoring equipment is critical to the safety of the skies over the CNMI and neighboring regions, and will aid in the resettlement of the Northern Islands.

4) The Troops to Teachers Program, which helps our returning military veterans earn a wage ($9 plus)while they are earning a Bachelor's Degree in Education and getting practical training as teacher's aides, is a unique program. The folks at the Pentagon are looking at this as a test pilot program that they hope to successfully replicate in other states.

5) I introduced the Joint Resolution urging the Governor to invite the U.S. Military to consider the CNMI in its plans to relocate to Guam. I said we hope this would help provide our citizens with jobs and help boost our economy.

6) And while we welcome the military and invite them to consider the CNMI as a place for some rest and relaxation, I am also concerned about the safety of our people. We're aware of the reported problems that have come out of Okinawa and Japan, and we want to highlight the fact that we share those similar concerns about protecting our citizens.

I laid all this out, one issue after another, without giving him time to answer. He was very gracious and listened patiently before he offered the following responses:

1) On the volcano monitoring equipment, he pointed out that Dr. Jim Quick of the USGS, which is under the Department of Interior, was in the room and that he is working on this issue.

Dr. Jim Quick was invited to briefly address the crowd. What he pointed out was that there was a funding request to set up a volcano observatory on Saipan. Actually, I know about this because I introduced the Joint Resolution urging Senators Stephens and Akaka to support the funding request that was attached to the Katrina and Iraq budget. Well, the budget wasn't passed and we became victims of a continuing resolution that does not have this funding request for our volcano observatory and monitors for all the Northern Islands.

Secretary Kemphorne's response was, "Well, the continuing resolution is over" and, much to MY delight, he turned to Depty Secretary David Cohen and instructed him to work on getting the monitors here and installed. WOW! THANK YOU! At least we know it'll happen.

2) On the issue of the military presence in the CNMI and some intended and unintended consequences, he agreed that the issues are important and pointed out that Assistant Navy Secretary B.J. Penn was there to address those concerns. Secretary Penn assured us that this is a matter that they take seriously also. GOOD!

At the end of this, Secretary Kempthorne walked over and put a green Hawaiian Lei around my neck (one of the leis he was given at the Southern High School Graduation he attended earlier in which he was the keynote speaker) and told me I deserved it. It got a laugh.

The next speaker was Katie Busenkell, who chairs Beautify CNMI!'s Animal Welfare Committee. Katie brought up the problem we're having with getting an Anti-Cruelty Legislation passed (it's currently stuck in the Senate). We have a lot of strays who tip over garbage cans which create an eyesore and more work for Beautify CNMI! volunteers. Of course, aside from the aesthetics part, there's also the health hazards that dead carcases and stray animals in general pose. We need a spaying and neutering clinic (which we're working on to bring off island vets who will volunteer to do a mass spaying and neutering clinic in January). We have many challenges, including not having a kennel and $$$!

He said the issue is close to his heart and he relayed the story of his own beloved family dog whom he rescued from a pound and kept for many years. He named him Truman, because it was Harry Truman who said "In politics, if you want a bestfriend, get a dog." He said that when he was Governor of Idaho, one local town was going to have a grand opening to open this kennel. Much to his chagrin, an invitiation came not for him, the Governor, to attend but for Truman, the first dog, to attend the grand opening. That story was cute and played well with the audience.

Secretary Kempthorne then gave Katie some suggestions as to who to network with back in the U.S. on the stray animal issue and offered to write a letter of supporting affirming that the CNMI is very much a part of the U.S. for those who don't think we are and may withhold certain services. Once again, David Cohen's workload expanded as he was asked to prepare the letter. Following her inquiry, Secretary Kempthorne went over and put one of his Hawaiian leis on Katie's neck.

Walt is the Guru who helped get Beautify CNMI!'s We Love Saipan network of bloggers launched with Angelo. Walt asked a simple question, which I will paraphrase: "How do we obtain the letter?" At this point, David Cohen went over to him and handed him a business card.

Dr. Norma Ada posed the next question, which is heavily summarized here. Dr. Ada said that since the military is moving here, would there be opportunities for the military to either help treat patients in the CNMI and throughout Micronesia and help transport them as needed.

In a nutshell, their responses appeared to be positive. They were glad that this issue was brought up and they promised to take it under advisement. Secretary Penn then went over and put his Hawaiian lei around Dr. Ada's neck.

And that, my friends, about sums it all up!

By the way, here's a Saipan Tribune Article concerning the reception. Click here.
Posted by CNMI Blogger at 11:17 PM

of all the issues to bring up with the secretary of interior, they brought up volcanoes and stray dogs? please tell me someone asked about labor/immigration concerns, environmental issues, our economy, educational issues, our infrastructure woes or the DOI's perception of the CNMI. if not, i would honestly be disappointed.

Volcanoes and stray dogs are environmental issues. Infrastructure was mentioned, labor and immigration was mentioned, and though it would have been nice if we had a longer Q & A session to present more issues to Secretary Kempthorne, the time was limited because he had to catch a flight to Guam.

P.S. If you read through what I posted, you would see that I mentioned introducing the resolution that urged Governor Fitial to invite the military to consider the CNMI also in their plans to relocate to Guam. I did mention that we welcomed the opportunity to provide jobs for our citizens and that we are aware of the possible unintended consequences also that come with having a military base in our community. I balanced this by pointing out that I fully support the Troops 2 Teachers Program, which speaks volumes about our people's patriotism and willingness to sacrifice and serve our country, including paying the ultimate price.

Thanks for the informative read, keep em coming pls =)

PS: Don't you think it'd be awesome if the other reps had their own blogs?