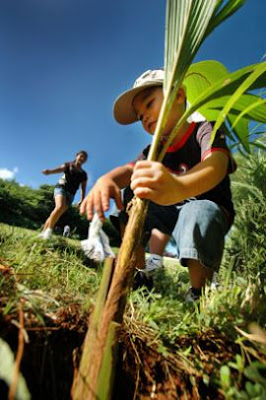 Vincent Fajardo, 6, plants a coconut tree with [his] sister Brianna, 10, on the side of the road near the entrance to the CNMI Veterans Cemetery in Marpi during the celebration of CNMI Arbor Day Saturday morning. The event is spearheaded by Beautify CNMI!'s Arbor Day Committee. (Jacqueline Hernandez). We made front page of the Tribune. Click here. Click on the photos below to enlarge them. 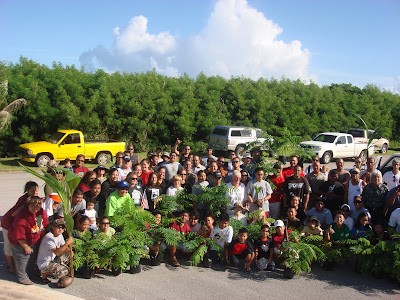 The group was too large for our photog, so a second picture was necessary to capture us all. 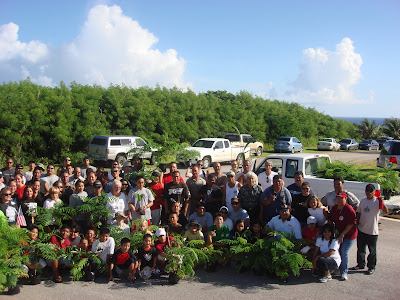 Even so, these are most of us but NOT all of us who were there. There were a bunch more of us who arrived about an hour later, so they missed the group picture.. 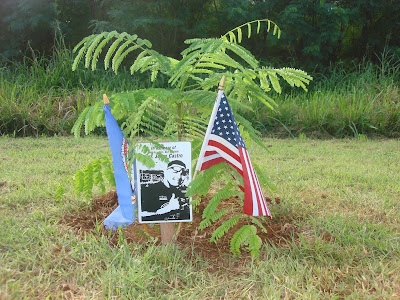 One of two flame trees that the family of the late Jesse Castro planted. His mother, Doreen DeJesus, and sister Lisa Castro-Pocaigue, flew up from Guam to join family in Saipan for the planting.


Here's the story that appeared in the Tribune.


Families of the CNMI's fallen heroes came together yesterday morning and remembered their departed loved ones with the planting of hundreds of trees at the CNMI Veterans Cemetery in Marpi as part of celebrations for CNMI's Arbor Day.

Military Veterans Affairs Office executive director Ruth Coleman said the Charfauros family in Rota even flew in for the event. Families of the late Jesse Castro also flew in from Guam, while the family of the late war veteran Gregorio Cabrera were also present.

Coleman said many CNMI soldiers on active duty also planted some trees. The family of the late Sgt. Yihjyh “Eddie” Chen called Coleman from Guam to acknowledge the event.

Beautify CNMI founder and Arbor Day Committee officer Rep. Cinta Kaipat expressed her gratitude to the participants, saying it was another successful tree planting event. “I am delighted and grateful for the response from the community once again. I am touched and honored to have all the three islands participating in the event,” she said.

CNMI forester and Arbor Day Committee officer Vic Guerrero said Arbor Day has been an annual tradition in the CNMI. Arbor Day is also being observed across the US.

“The increased observance and emphasis given by the CNMI demonstrates our deep appreciation for the beauty of trees and their many benefits,” reads part of the proclamation letter declaring Arbor Day.

Guerrero said at least 45 flame tree seedlings were planted yesterday. The flame tree is the state tree of the CNMI.

Two Golden Showers trees were also planted at the entrance to the veterans memorial park. Guerrero said these two trees would later produce chandelier-like yellow flowers that are appropriate to honor the CNMI war heroes.

Members of the Veterans of Foreign Wars Post 3457 led by Commander Mariano Fajardo, the U.S. Coast Guard, Division of Agriculture, ISA CNMI, Friends of the Mariana Islands, Youth Center of the Church of the Latter Day Saints, CNMI Boy Scouts, Team Chura Talo, RC & D, Northern Marianas College, Office of the Governor, among many others, were also present.