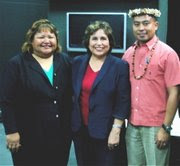 LAST SHOW OF THE YEAR. The final showing of John Oliver Gonzales' show for 2007 which featured House Representative Cinta Kaipat and Senator Maria (Frica) Pangelinan aired on December 26, 2007. The topic was the Commonwealth Employment Act (Public Law 15-108). Replays of the December 26 Gonzales show can be seen on Saturday, December 29, and Wednesday, January 2, on Channel 2 at 7 p.m. (Photo Courtesy of Janet King)

After the show, we went up to the 360 Restaurant for dinner. This was the first time I've been up there. I've read Jeff's endorsement of the Restaurant, so I was curious to check it out myself. Brother Gus had the 360 burger; I had the super burger; my prima Janet King ordered the huge delicious salad; and Senator Frica ordered fish & chips. Jeff was right -- the food was good and plentiful and a couple of the owners stopped by our table for a chat. Given our topic on the John Gonzales Show, I was happy to hear from one of the owners that this Restaurant has made some genuine effort to recruit and employ local resident students to work as waitresses. According to the owner, they are doing just fine. Kudos to the management and staff of 360 Restaurant!
Posted by CNMI Blogger at 2:43 PM